Shoppie is a price comparison site that helps Australians easily find the total price including shipping of products from around the world and whether or not they ship to Australians. 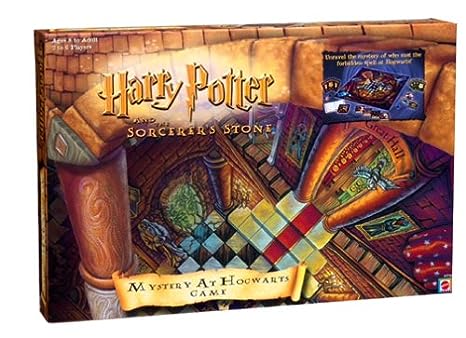 Whilst every effort is made to show accurate pricing and products please always confirm the total shipped price with the merchant. When buying appliances please ensure that the appliance is compatible with the voltage in your country.
Think this is a good price? Submit it to the front page for voting!
Submit to the
Front Page

Product DescriptionCan you solve the mystery of the forbidden spell? This Harry Potter Mystery at Hogwarts Game from Mattel takes you on a magical ride through the halls of Harry"s famous school. Someone has cast a forbidden spell and you need to figure out who did it, which classroom they were in and what spell was cast. But be careful: Peeves, the poltergeist, is out to get you. For 2 to 6 players. Ages 8 and up. Imported.Amazon.comWas it Ron Weasley with the Wingardium Leviosa spell in Filch"s office? Or was it Draco Malfoy with the Alohomora spell in the Transfiguration class? If it seems that the Mystery at Hogwarts Game bears more than a passing resemblance to Clue, the classic detective game, you"re not imagining things or under the spell of Goyle"s Forgetfulness potion. With colorful and stylish game equipment, Mattel has melded the world of J.K. Rowling and Master Potter with the realm of the Brothers Parker and Professor Plum. Players move about the representation of the Hogwarts School of Witchcraft and Wizardry to determine which three cards are contained in Fluffy"s folder. Additional features include a roaming ghost, which can send players back to Start, and certain Hogwarts emblems on the dice that allow a peek at opponents" cards. The Mystery at Hogwarts Game is an attractive and well-designed (if not exactly original) deduction game tie-in to the publishing phenomenon. It will amuse fans more partial to Miss Granger than Mr. Green. --Tony Mason

Shoppie is a participant in the Amazon Services LLC Associates Program, an affiliate advertising program designed to provide a means for sites to earn advertising fees by advertising and linking to amazon.com.

Please read our Privacy Notice for information on how we use and store your personal information.